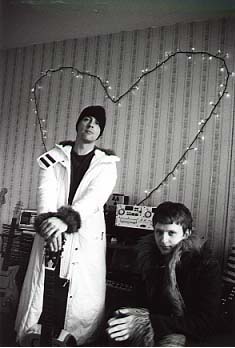 Describe your sound
Dan - Sterling Morrison's Razorwire and Moonshine Band transmitting live and loose over the divine wind or broken nose boogie? Don't ask me I just play guitar..and badly at that.
Matt - Wonky Blues, hip-funk gospel. With a touch of latin thrown in for good measure..Of course I may describe it as something else in a few months time.
David - Fingerfood from the buffet of eclecticism.

Why a Cabaret?
Dan - Well you always need something to keep your crockery in and besides it adds character in a room.
Matt - I think we all love that fim with Liza Minelli.
David - Because we are pretentious.

Don't you like drummers then?
Dan - I love 'em but they don't like me. As these things usually do it all stems from a falling out over a woman, but the less said about that the better. Suffice to say it all ended in tears and relations have been sour ever since.
Matt - Nothing against them..We just haven't found the right one yet.
David - They come, they go. It's a drag.

Real World, just down the road. How does Sonar Footprint Clinic compare?
Dan - Call me an old stick in the mud if you will, but I still prefer a bit of Star Trek or Battlestar Galactica. Most of these modern sci-fi shows just seem derivative and cheap to me, although I hear that John Lewis do a very good one.
Matt - I can think of a lot of differences, but no similarities!
David - The best records are made on broken four-track recorders.

Plans for the future?
Dan - N/A
Matt - UK tour followed by world domination, where the Cabaret Maledicta become a major force in global politics and divides the world into small anarcho-syndicalist communities that eventually dissolve and leave the planet in general disorder..that would be a good time to release a greatest hits album I think.
David - Need to finish this.

So what do you have to say to all the other bands out there?
Dan - I will once again state my dedication to reaching peaceable agreement with our fellow musical collectives although we will of course react with extreme pre-emptive force to any "rogue combos" who so much as look at us funny.
Matt - Well, I salute elastic & rubber bands because they perform an important role in everyday life, but hair bands are just for show offs.
David - Get out of the fucking way.

NOW YOU SURELY WANT TO BUY THE CD...?